My Trip to St. John’s Cemetery

One of the best ways to make new discoveries in your family tree is to speak to your elders. Almost always, this is going to be the first step anyway. However, sometimes we don’t revisit those old conversations or we forget certain details that were brought up before. Hence, why it’s always important to write things down (something I tend to not do).

However, I always try to make it a point to talk about any new developments with my family tree with my grandmother.

Oftentimes, a new discovery that I made will spark a memory of hers that we hadn’t talked about before. It’s also a good way to confirm that what you found was indeed correct or at the very least tell you that you are on the right track. One of my favorite things to accomplish in genealogy is matching up family stories with actual documentation. Being able to confirm the truth of a family legend is one of the most gratifying things I feel that you can accomplish in researching your family tree. The only downside though is that it often leads to more questions, but in genealogy, questions are a very, very good thing to have.

After discussing my previous post with my Grandmother, I learned that Juanito and the younger Rosalia (15 years old) were indeed Louis Garcia’s children and that her grandmother (Louis’ sister – also Rosalia) was their godmother. Obviously, being one of the first and clearly unexpected deaths experienced by the family in America, the only plot available was probably the plot in St. John’s Cemetery where my 3x great-grandmother had been buried. So, it makes sense that Louis’ children would be buried with his mother (who from what I can determine – came to the United States without her husband and thus was not buried with her spouse).

What a rough time – 3 deaths in a matter of 1 year. In fact, Juanito and his sister Rosalia died within almost a month of each other. According to my grandmother, they both died from appendicitis. By running some new searches, I uncovered their death certificate numbers, and once I am able to procure them, I will be able to confirm their exact cause of death.

The searches I ran were on both Familysearch.org and Italiangen.org. As I already mentioned in my last post, the databases made available by the Italian Genealogical Group are extremely valuable for anyone with ancestors from New York City.  The documents available on FamilySearch are also another great tool and unlike the database at Italiangen.org, they include more information on the death records of those who died in New York City.

Equipped with the dates found on their headstone, I was able to easily find both of them in the ItalianGen database, which also included the death certificate numbers. It’s always easier when you have the certificate number when ordering vital records (birth, marriage, and death) from New York City.

It was at FamilySearch though that I was able to learn something that I did not know before. The name of Juanito and Rosalia’s mother was Anna Sanchez. The father listed on each record was also Louis Garcia thus confirming that I had the right death records. Clearly, I had the right people. 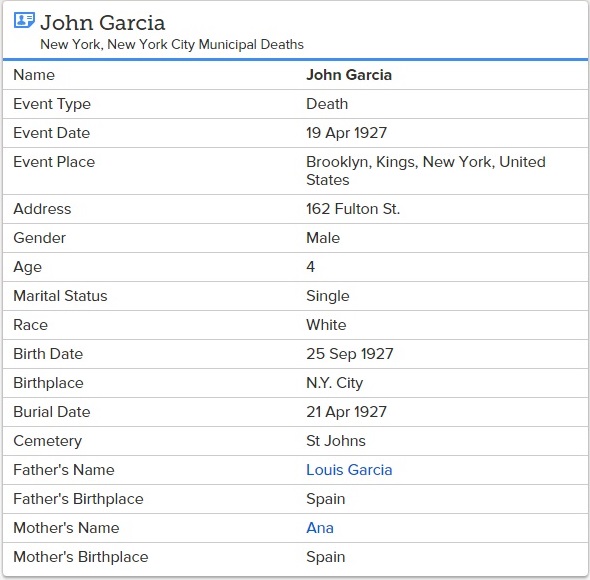 As you can see, there are some irregularities in the FamilySearch results. However, this is more than likely due to a transcription error. Many records are entered into databases by volunteers thus human errors sometimes happen. The best thing for me to do now would be to order their death certificates so I can actually view the record myself.

The discovery of Anna (their mother) led me down on a path that revealed additional cousins that I had never heard of before. I was able to uncover census records and Louis’ petition for citizenship on Ancestry.com with details about the entire family unit, which I wouldn’t have been able to do without the information available on the death certificates and of course by visiting their gravesite.

This is all that I have been able to find for Louis and Anna Garcia. Despite the heartbreaking circumstances that I first came to uncover this information, I am happy that I am able to ensure that they are never forgotten.

Here I am as usual with more questions…

Questions that I am nonetheless glad to have.

Think about this for a moment. Both of these children – my cousins – passed away at such a young age (4 and 15), and it was only by visiting them that I would have ever even known that they existed.

Sometimes though it is the complete opposite – we visit a gravesite first in order to get that new lead that leads us down a completely new path of research.

“I believe I might be able to solve some of the mystery. The two children were my Great Uncle Louis’ children. My Grandmother Rosalia was their Godmother and my Grandfather Juan Fariñas paid for their burial and bought the headstone. Both the children passed away from burst appendicitis and my Grandmother Rosalia was, as I was told heart-broken. I cannot imagine that my Grandmother’s name was not on the stone. What confuses me more was that my Mother told me her Grandmother lived into her nineties, and I always thought that she had outlived her daughter. I will have to ask my cousin Rosalie. Yes, another Rosalie. Maybe, it was my Grandfather, Juan’s mother instead that lived into her nineties. My grandfather Juan always took care of the entire family.”

Indeed, he did. To help decipher the numerous Rosalies in my tree, please see the below tree.

One day I hope to be the one to add my great-great grandmother’s name to this stone. 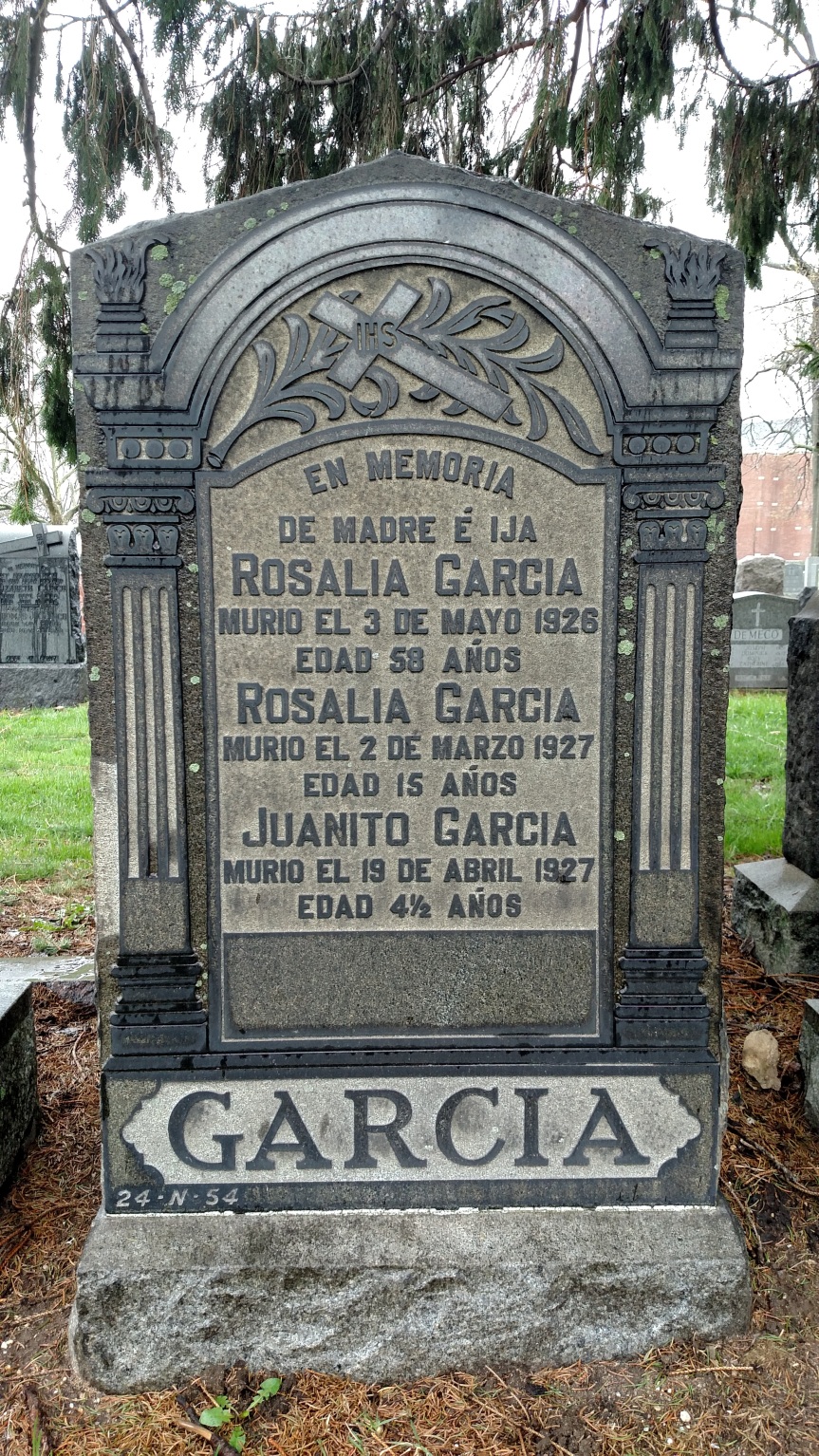 My Trip to St. John’s Cemetery

Before I got the flat tire, I visited St. John’s Cemetery in Queens, New York. The staff there was incredibly helpful in assisting me with finding the final resting places of the many ancestors of me and my fiancé that are buried there. In fact, there were only two people that I needed them to look up because I came in already knowing the exact spots of where many of our ancestors were.

This was thanks to their online tool called Locate A Loved One. This search engine offered by Catholic Cemeteries gives you the exact location of where your ancestor is buried. It covers St. John’s Cemetery, Mount St. Mary in Flushing, Holy Cross Cemetery in Brooklyn, and St. Charles Cemetery in Farmingdale. Not all records have been uploaded to the website though. So, don’t assume that just because one of your ancestors doesn’t appear in the search results that they aren’t actually buried there. The best way to confirm where your ancestor is buried is to obtain their death certificate.

For those that died in New York City before 1949, you can purchase their death certificate online from the New York City Municipal Archives. Some people opt to actually visit the archives and take photos of the records in order to save some money. However, if you do not have the capability to travel to New York City, then you will have to pay the $15 fee to obtain a copy of each record. I always make my records available on Ancestry.com because to me it just doesn’t make sense to make people continue paying for the same information. I wish New York State made their vital records publicly available but for now hopefully you have a cousin out there that has made it available instead.

If you have not a clue where to begin to locate a death record in New York City, the NYC Death Index provided by the Italian Genealogical Group is a good place to start. I have had a lot of success using this tool and the ancestors I am about to highlight were all first found using this great database.

The first ancestor I received information on at St. John’s Cemetery was Rosalia Fariñas (née Garcia), my great-great grandmother. I actually wrote about her before as part of the #52Ancestors challenge in 2014.

I always wondered why she wasn’t buried with her husband, Juan Fariñas, who is buried at St. Charles Cemetery in Farmingdale. When I asked my grandmother about it, she stated that her grandfather Juan was supposed to be buried with her but a little boy in the family had passed away and was buried at the plot in St. John’s. I suppose there was such a large gap between the two of them passing away (33 years) that the plot in St. John’s had filled up and the choice was made by Juan to get another plot in a Long Island cemetery instead. Anyways, I was intrigued to see who these other people were that were also buried with my great-great grandmother.

The other ancestor I received information on at St. John’s Cemetery was Rosalia’s mother, my 3x great-grandmother, Rosalia Garcia (née Bautista).

As I had figured, they were buried in the same plot together. Knowing it is standard for many plots to just hold 3 people, I figured it was the two Rosalias and the “little boy” – perhaps a kid brother of my great-grandmother that our family never knew about. What I found was interesting and beautiful.

What I was looking at was one of the most beautiful headstones that I had ever seen – certainly something more than what I thought my Spanish immigrant ancestors could afford. The stone was absolutely stunning and quite frankly looked brand new. No doubt that this is the type of stone that will last hundreds of years without needing any type of restoration.

I called the office back. They said, “No, she is there.” Turns out there weren’t just two Rosalias there. There were three. I had never heard of this Rosalia. I had also realized that someone had failed to make sure that my 2x great-grandmother’s name was added to the stone. Through this website, I hope to be able to be that person that finally gets her name up there.

So, who was this other Rosalia? And who was Juanito? Turned out my grandmother was right. There was a little boy buried there (died at just 4 years of age). What happened to them? How were they related to me? Who were their parents? They seemed to be too young to be the children of my 3x great grandmother and to my knowledge they weren’t my 2x great-grandmother’s kids. So, who were they? So many questions…Questions that never would have been asked had I not taken the time to visit them.

My hypothesis was that they were the children of Rosalia’s brother Louis (who I mentioned in my last post about her). Where was Louis buried though? Why weren’t they with their parents? All things I had to look into. Well, I did and I am happy to share what I have found…in my next post.

#52Ancestors is a campaign challenging family history researchers to write the story of one ancestor per week for each week of the year. I was only able to get to 6 ancestors.